Given the last few days, we should remind ourselves again and again what the implications of gender self-id, or even easy access to a GRC are, for women: we are legally obliterated as a sex class.

I pointed out the problems with saying that trans women are women in this thread:

I pointed out the problems with saying that trans women are women in this thread: https://t.co/zN0ziAZzyM

I’d like to add some text and a diagram from the underlying blog post to make it clear what I’m getting at when I say that the statement forces us to prioritise gender id over sex: (from https://t.co/4anAZVv0Ay) 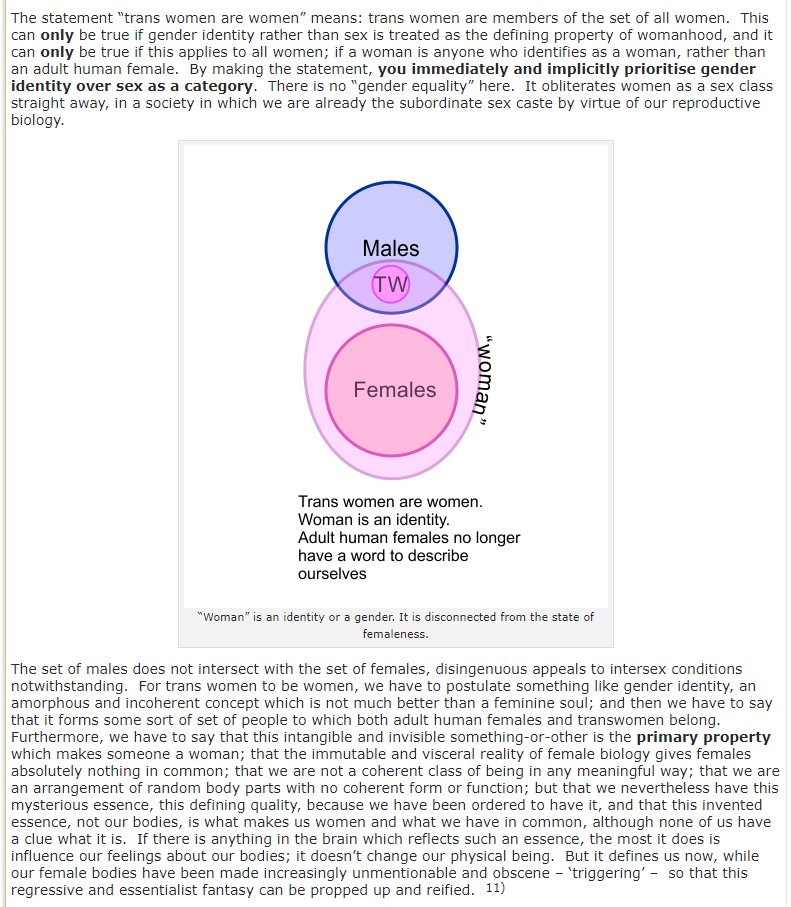 I say ‘supplanting’ because both sex and gender reassignment are protected characteristics, but what is clear from the AWS list controversy and others is that sex has to give way to gender identity as the protected category.

This is entirely consistent with a radical feminist analysis of gender as hierarchy: low status gender-non-conforming men have the option to become high-status women, supplanting the women for whom the positions and services were created. This is what is happening.

Whether this was the intended consequence of legislation or not, the effect is one of extreme misogyny and the undoing of a century of feminist efforts.

As Helen Saxby’s excellent article points out, the GRA of 2004 was intended to protect the rights of a few extremely dysphoric transsexuals. It is no longer fit for purpose as the explosion of gender identity politics could not have been foreseen.

An approach seeking to improve the rights and visibility of trans people without erasing women’s progress would acknowledge this, go back to the drawing board and start with the assumption that trans women are *not* women.

Then the needs of women and trans women can be discussed, areas of overlap and difference identified, and legislation and facilities created accordingly, in the interests of finding a genuinely fair solution.

The current legislative path towards gender self-id renders women invisible as a sex class and not even deserving of our own label. I believe Rebecca Reilly-Cooper’s Basic Questions illustrate what we are asking for:

And when I say extreme, I mean extreme. Even the men who denied us the vote didn’t try to pretend that we didn’t exist.