The ‘sex is bimodal’ stuff is ridiculous. Sex determination and differentiation is about as binary as it gets. The reason characteristics common to men and women, like height or hormone levels, are distributed bimodally and not normally is the impact of the sex binary on them.

For things like height, upper body strength, lung capacity, shoulder-to-hip ratio, hormone levels, etc, which are characteristics of the *species*, you’d expect the distribution of values to look like this: 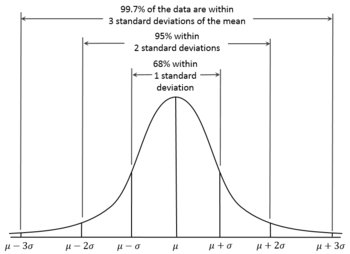 That is not because sex is a continuous probability distribution (duh). It’s because the sex binary has a big enough impact on many other non-sex phenotypical characteristics to push them into two broad ranges of values.

If there was anything continuous about sex itself, non-sex characteristics would not demonstrate such distinct bimodality.

The most common reason for an apparent bimodal distribution is that you are graphing the overlap of two different normal distributions with different means and standard deviations. Two, so your multimodal has two peaks. 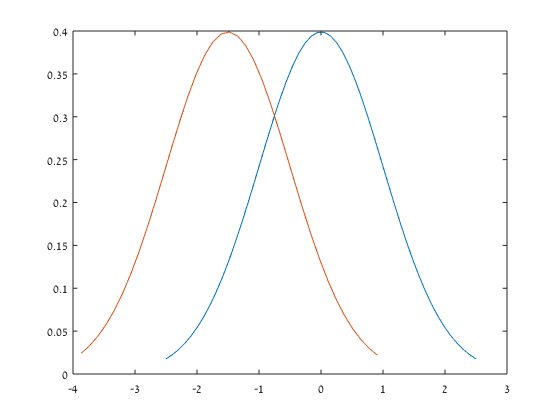 Not three (or five, or seventeen). Two. Because sex divides humanity into two different populations with different distributions of a number of shared characteristics. 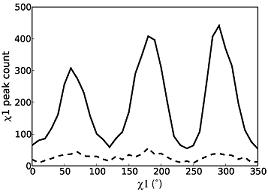 If sex itself is a continuum, how do you order it? What function determines < or > so you can position one sex value relative to another sex value on the continuum?

If sex is given by some function y = f(x) then what is x? How is it mapped to the real numbers? Define f. Draw me a graph.

Hint: you can’t. Because sex divides people into one of two categories, and intersex conditions are disorders of development of one or the other categories, and can be mapped onto them. This is not bimodal. It’s non-parametric. 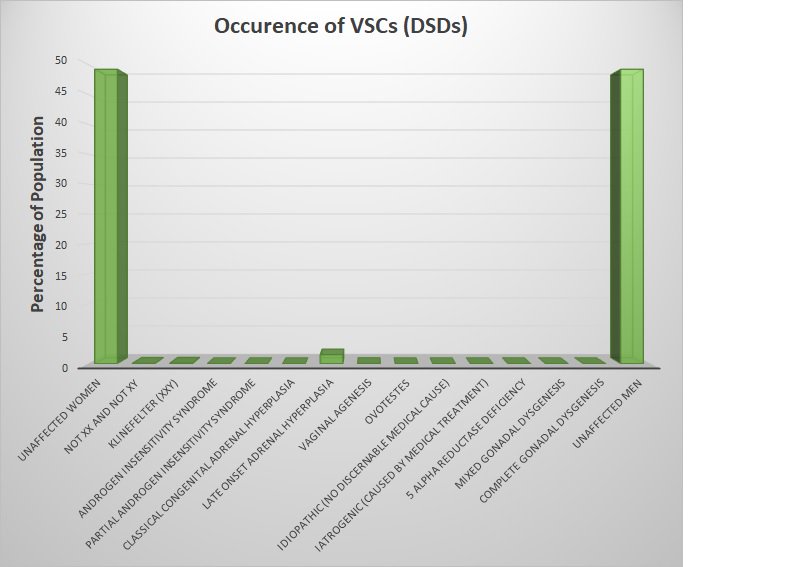 But the maths would matter less if women weren’t treated differently on the basis of their biology. However, we are, and treating woman as an identity, and just another arbitrary variant in some privilege-totting scheme, destroys feminism. (Which is the point, or course).

So I think it’s time we said that if you want to do these identity-collecting exercises, you need to treat sex as orthogonal to the other axes of oppression. (Orthogonal means ‘at right angles to, in all dimensions’). It cuts across all of them.

You can visualise it like this picture. This doesn’t mean that all men oppress all women in all possible ways. It means that if you hold all the other social positions – race, economic class, sexual orientation – constant, women will always be worse off than men. 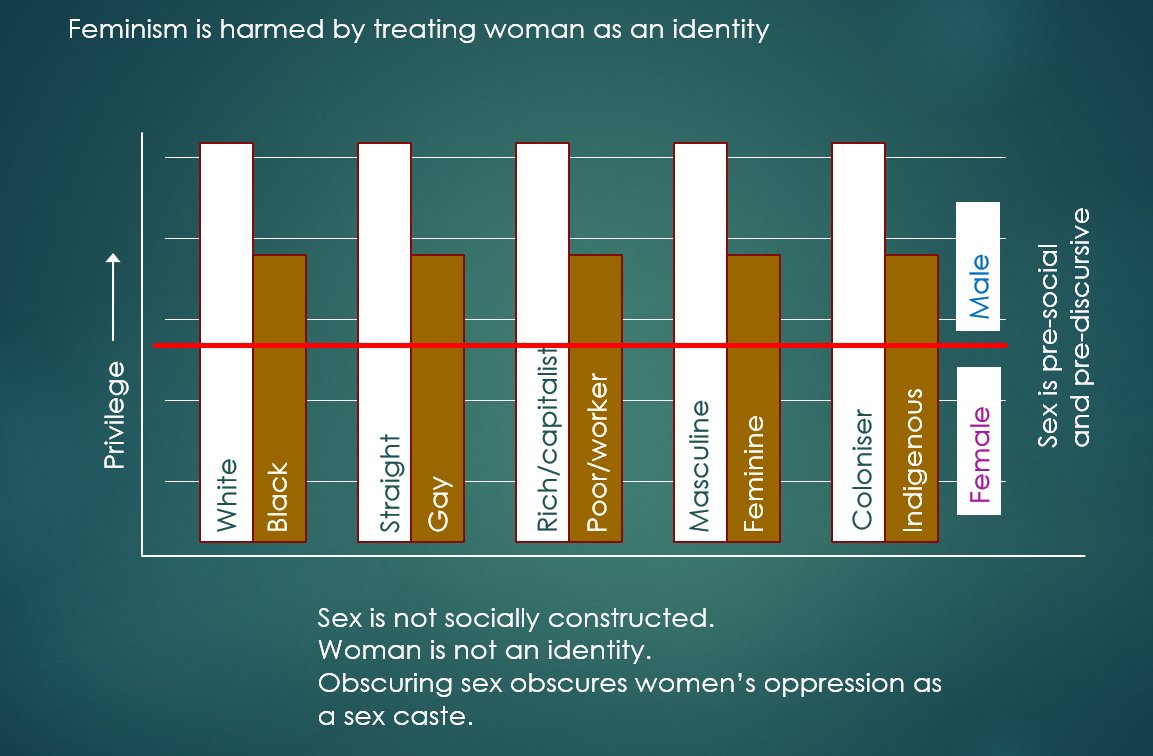 This is sex-based and has absolutely nothing to do with gender, which is why we see a hierarchy developing where transmen are no threat to men, but transwomen are colonising women left, right and centre. There is nothing accidental about the consequences of TWAW. 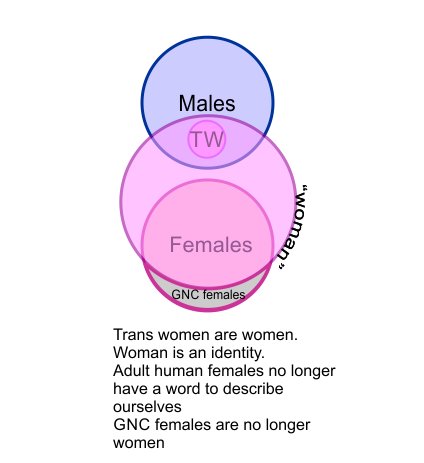 Feminism can’t absorb this. The versions of ‘feminism’ which try to be ‘inclusive’ of males have less than nothing to do with feminism. They’re pandering to the hierarchy. They’re actually sexism, anti-feminism. Women do this all the time #YesAuntLydia

And one of the failings of Foucauldian/Butlerian queer theory is that its adherents actually think they’re preaching feminism, when what they actually teach is the obfuscation of sex-based oppression, to the detriment of women. That’s how far neo-liberal thought has crept in.

Transactivism in particular is more often than not a Trojan Horse for really ugly misogyny. It needs to be booted out of feminism, and change its focus to rights and acceptance for trans people, which cannot happen at women’s expense. #newbacklash 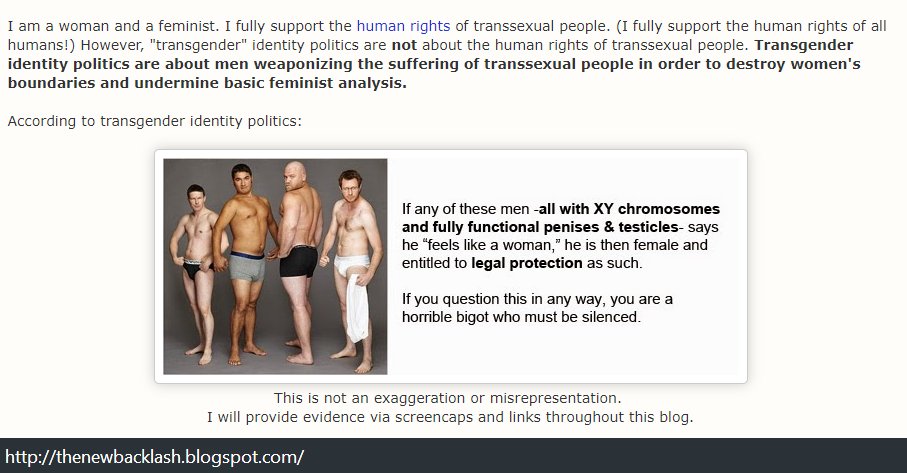 For this to happen, we need to get back to basics. Feminism is the movement to liberate movement from sex-based oppression. Naming it sex-based makes it clear that men can (occasionally) be allies, and women can be opponents. Third-wavers and TRAs are opponents of feminism.

No other movement demands that its members prioritise everyone else’s issues above their own, and neither should feminism. If it’s not about women’s sex-based oppression, it’s not feminism. Any intersection relevant to feminism ALWAYS includes sex. #TRASOut

Time for some hard, exclusionary, focused feminism. We’ve got a lot of lost ground to regain. If we didn’t have to waste so much time on transactivism, we could have taken the sex industry down by now. 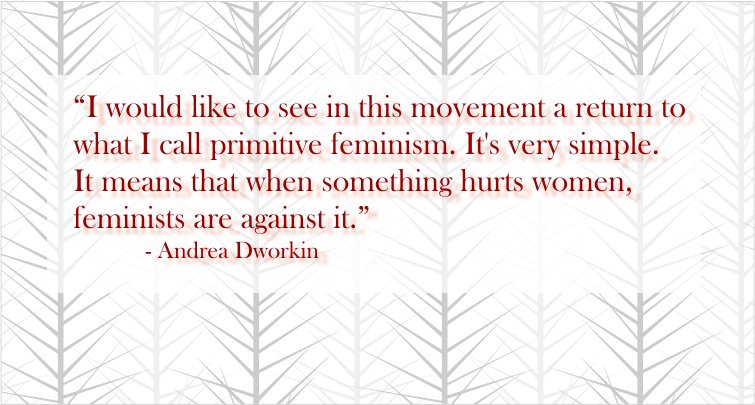