I could deal with the flashing, actually, if we could just acknowledge that he’s a man, and that there is a massive elephant in the room here, namely fetishism.

I could deal with the flashing, actually, if we could just acknowledge that he’s a man, and that there is a massive elephant in the room here, namely fetishism.

The AGP-truth blog is a bit paranoid-sounding, but this article is eminently academically respectable and people should be more aware of its contents given the current consultation on the GRA:

In it, Bailey & Triea explain Blanchard’s typology of transsexuals – a body of research which groups them into two broad categories based on sexual orientation.

Very feminine gay men who transition are known as androphilic.

They are attracted to men, are typically gender-non-conforming as children, and are what people think of when they think of transwomen as very feminine and knowing that they are ‘different’ from an early age.

Blanchard sees this as being a fetish at the extreme end of the transvestism scale. Many such men do in fact transition – ‘becoming what they love’ as Anne Lawrence, an autogynephile transwoman and psychiatrist put it. Her book Men Trapped In Men’s Bodies is a great read.

AGP isn’t dangerous in itself, and there are many self-aware AGP men out there on the Twit who are good allies to women. But there are three big problems with refusing to acknowledge it:

First and foremost, if men who are aroused at the thought of themselves as women are being given access to women’s spaces on the basis of being trans, this is the legal enabling of large-scale sexual harassment. Women do not owe these men validation.

Second, such men are deeply invested in being seen as women and will often deny their maleness. Alice Dreger made an incredibly insightful observation in Galileo’s Middle Finger – attached.

Michael Beltine bears this out. I think this is where the ‘trans women are women’ mantra is coming from – these are men who cannot bear to be confronted with their maleness, because it means the destruction of their sexual hopes. 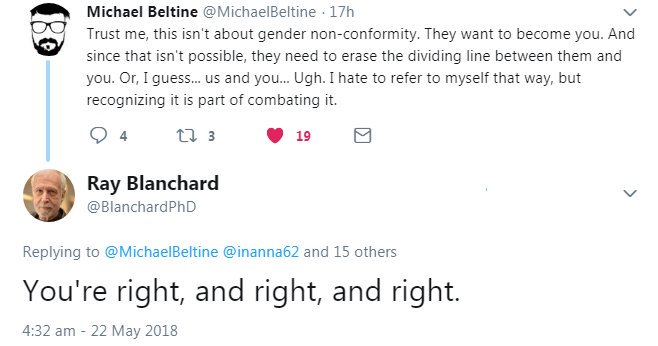 But if this isn’t challenged, then women are not allowed to set ANY sex-based boundaries. This is particularly invidious in the case of lesbians, who are being targeted by these men, because sex with a lesbian is the only way they can maintain the fantasy while being str8 men.

This, I think, is also where attempts to suppress and deny women’s biology come from. Anyone who highlights the difference between women and transwomen is highlighting that these men can never have their romantic dreams fulfilled.

Third, paraphilias tend to be co-morbid, i.e. they occur together, as the Bailey article points out. This means that an AGP man is a bit more likely than the general population to have another fetish, like masochism, exhibitionism, paedophilia or sexual sadism.

It doesn’t mean all AGP men are raving perverts, far from it. It does mean they have some overlap with the population of dangerous sex offenders. Policy-makers who ignore this are letting that population loose on women.

Women who’ve been following this for a while are aware of this: we’ve seen everything from men stealing used sanitary products and wearing them to men threatening to “cut off terf cunts and wear them”. Threats of violence, rape and “suck my ladydick” are common.

. Lists of incidents of violence are growing; but govts won’t collect this data, and if we do, we’re accused of bigotry.

Or we get the sort of claims that we’ve seen today, that Jess Bradley “isn’t really trans” if the allegations of exhibitionism turn out to be true. Here’s the thing: women have no way of telling the difference, and it should not be our problem.

It’s time to be very blunt: that there are a large number of people in the trans community who are there for reasons of sexual gratification, that they represent a danger to women, and that proposals for changes to legislation are wilfully ignoring the evidence.

Safeguarding of women and children needs to be a priority in these consultations. Women are entitled to be heard.

PS: if anyone is in any doubt about the existence of AGP, just Google girldick and look at the pictures. But don’t say I didn’t warn you: you’ll need eyebleach afterwards.