I do like a good Venn diagram, so I thought I’d do some on smashing the binary, seeing as how I’m trying to read my first ever French post-structuralist author.

This is what our natural, prediscursive state looks like. (Hint – we’re divided into two sex classes, like all the other mammals). Males may have obtained some power by dint of being bigger and able to exercise force. We don’t really know how patriarchy got going. 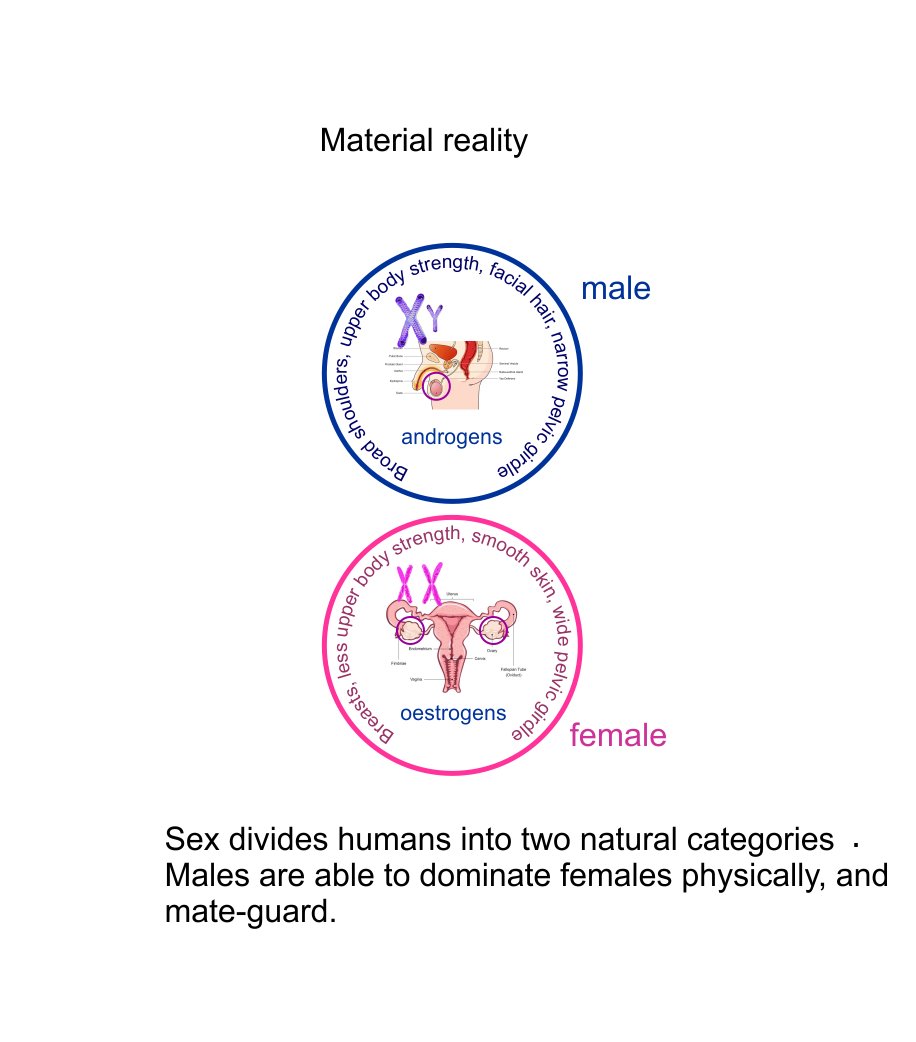 This is what the post-structuralists call ‘the binary’. (I’d prefer to call it a polarisation of power or something, because binary has very specific meanings in maths and science, but let’s go with it.) It builds up *on top of* a natural difference. 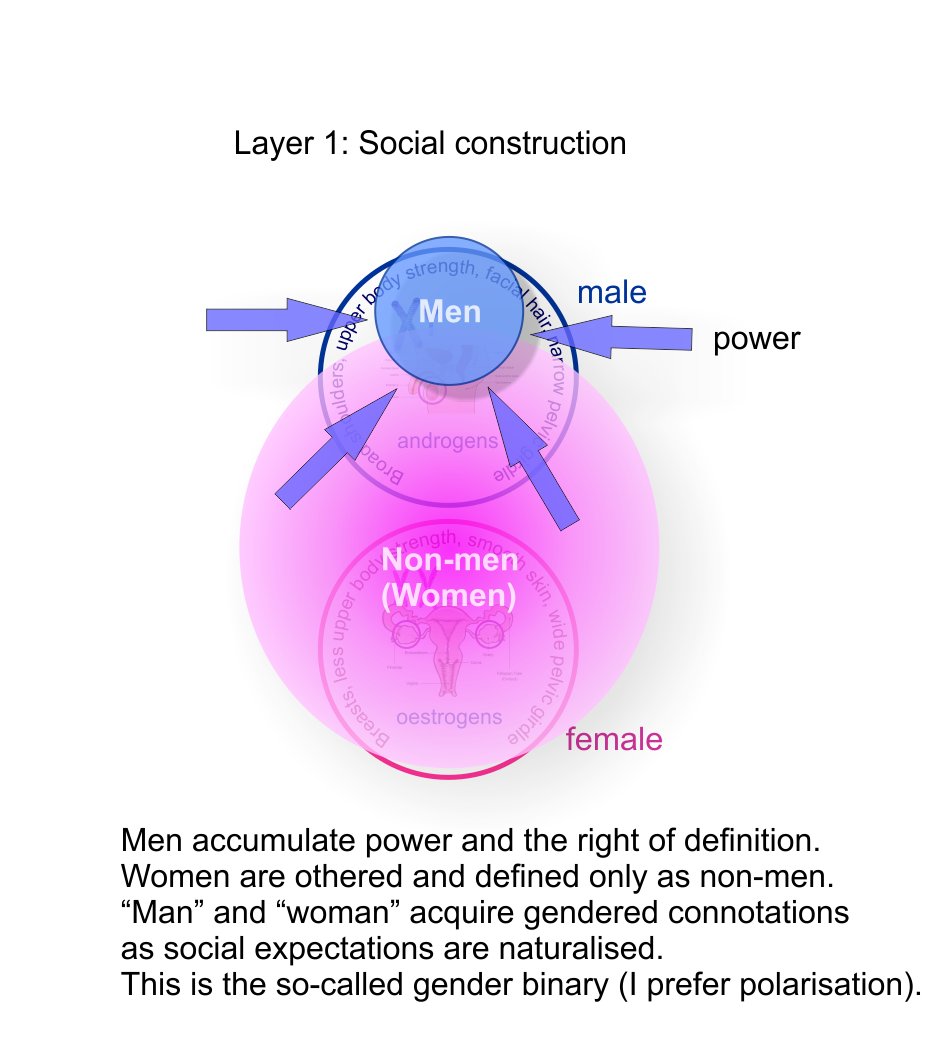 What it means is that power aggregates around one pole, which is where the defining happens, and is denied to the other pole, which is defined only as ‘not’ the powerful pole, i.e. it is negatively defined. Women are no more than a sexual and reproductive resource for men.

This leads to the sort of opposites described very well here https://t.co/pBunCwK8Uc
In every case there is a dominance hierarchy, through which social power, language and the right of naming are controlled. 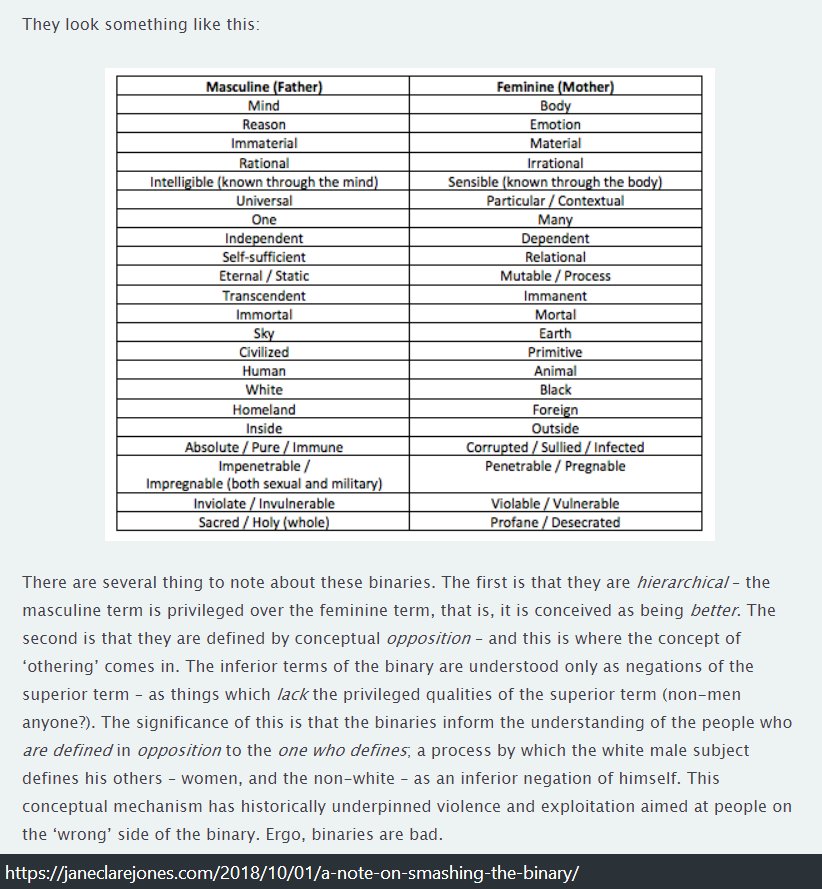 Initially this is maintained through force, but successful oppression always involves naturalising the oppressed status of the lesser pole. This is done by creating and maintaining cultural norms which uphold the binary and make it seem natural. (the squiggles are the norms). 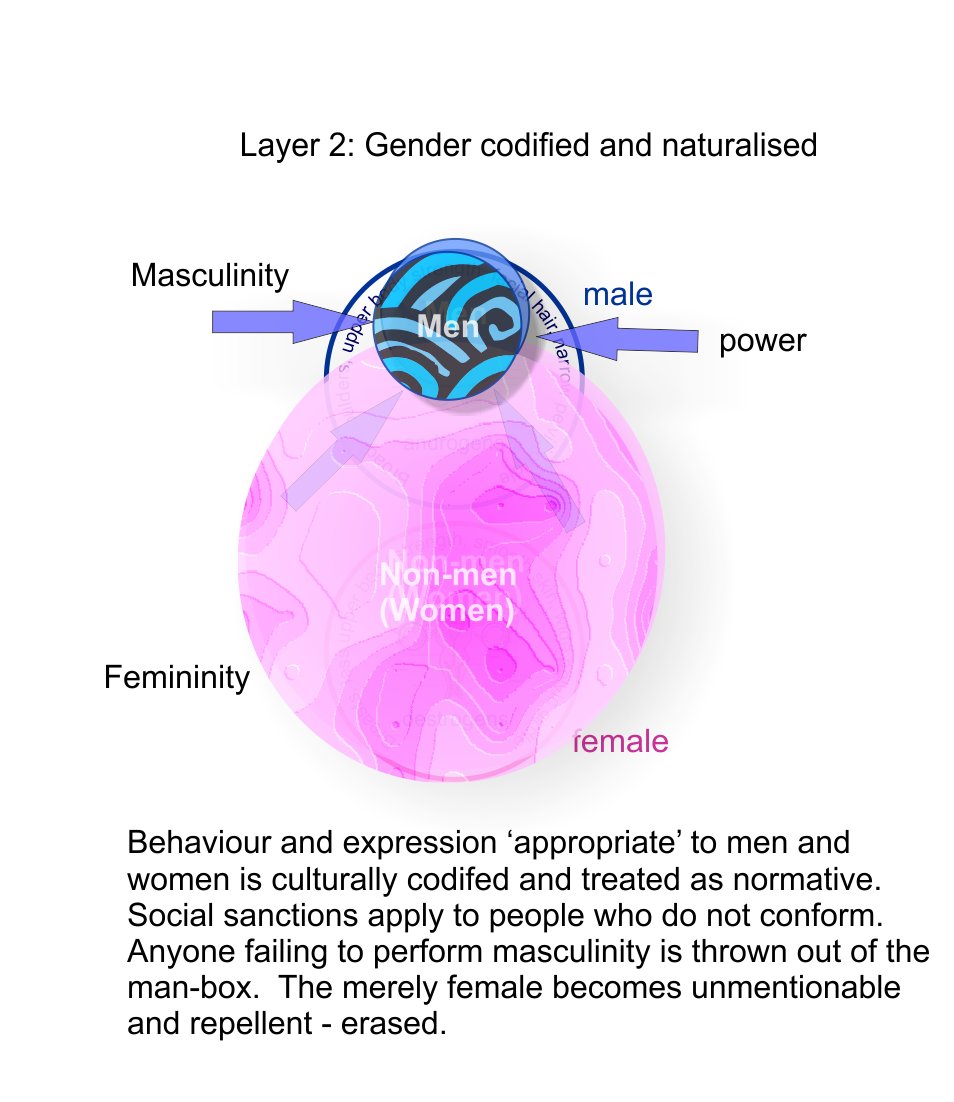 So suitable dress, behaviour, interests, aptitudes etc for men and women become treated as the natural order of things. Men are strong, decisive, beardybros. Women love frills. Frilly people are not allowed to be men. Most importantly, women start to believe this shit.

And so the ‘other’ status of women becomes the norm, although the specific cultural patterns may change with place and time. Woman becomes a dumping ground for all those not permitted to be Real Men. Women’s bodies remain a resource for men, but are increasingly unmentionable.

All this is treated as innate, natural, the will of god (or evolution). As @Huttoneer says, in this model, a woman is someone with any body and a female personality.

In the extreme case, as we see in hyperpatriarchal ideologies like transgenderism, the female body is completely erased and the collection of gendered stereotypes *is* the woman.

Any ideology (like queer theory/transgenderism) which upholds socially constructed stereotypes of this nature, and treats them as innate, is upholding the binary – that should be fairly obvious, as much as trans ideologues try to argue their way out of it.

And once you’ve smashed it, what you’re left with is a non-hierarchical relationship between two natural categories of person, neither of whom use violence or coercion to control the other. 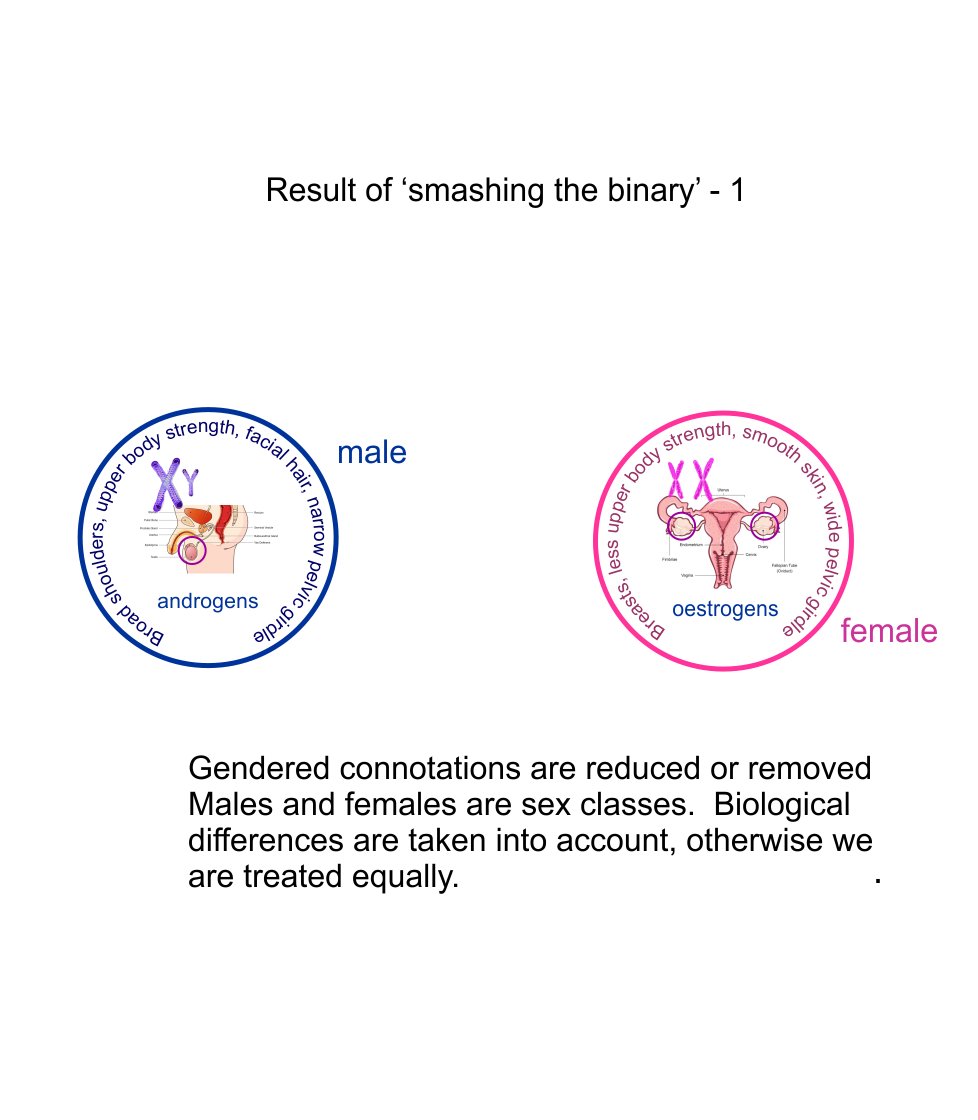 Man and woman are then neutral descriptors for sex classes, not the repositories of a pile of sexist fantasies about what men and women are ‘supposed to be’.

Again quoting @Huttoneer, in this model a woman is someone with a female body and any personality. 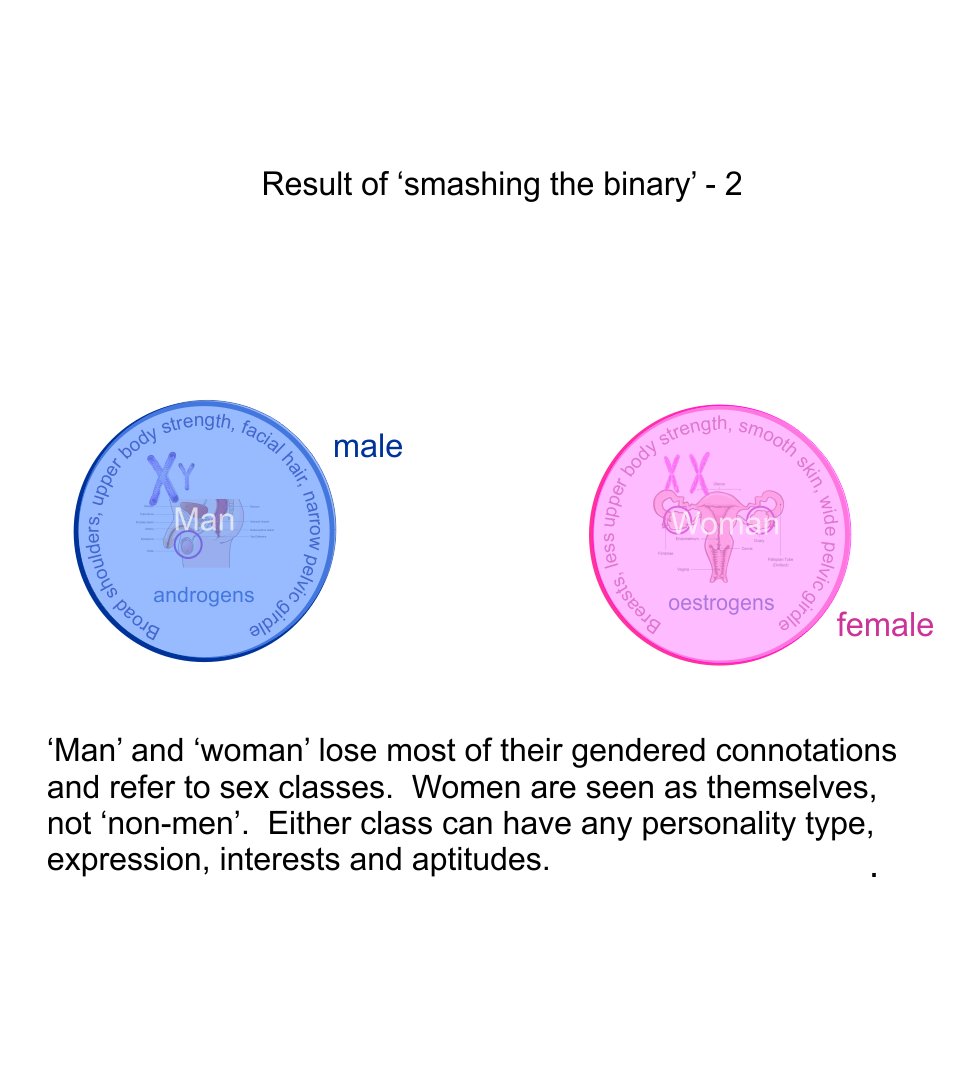 Importantly, in the latter case, women can self-define, construct our own social networks, modes of learning, ways of relating. This is the polar opposite of men telling us what a woman is, or claiming that their identification with a stereotype makes them one of us.

Queer theory is innately sexist. It is incompatible with, and antagonistic toward, feminism. It’s not accidental that it is the Trojan Horse for the latest epidemic of misogyny. Time to boot it out of feminism.

Addendum: here is Cockshott’s analysis of sex as prior to gender and language – good read.