She’s right. It cannot be a right to identify into a group you are not objectively a member of, because the boundaries of that group, which are what secure their group protections, are instantly voided. You have to create a separate target category.

She’s right. It cannot be a right to identify into a group you are not objectively a member of, because the boundaries of that group, which are what secure their group protections, are instantly voided. You have to create a separate target category.

Women’s status as a sex caste is what informs feminism. All the protections won by feminists post-suffrage – single sex spaces incl refuges, sporting leagues, political representation – empower women precisely by excluding males. If males can identify in, they cease to exist.

There is no way to allow males to identify as women which does not instantly demolish all women’s legal and social protections. I don’t like calling this a rights conflict, because it’s appalling that this is being construed as a right at all.

Allowing males to identify as something other than men (in the gendered sense), and providing facilities and social recognition for them: fine. Conflating them with women: not fine. It is a violation of women’s human rights, full stop.

If anyone can lay claim to these, the protections of disabled people are voided. Sports is a good example. We have plenty of people claiming that Rachel MacKinnon should be able to compete with women (this is because society is sexist, not because this is an ethical position).

Would the same people campaign for MacKinnon to compete in the Paralympics? Would they claim that disability is a social construction, that someone paralysed should just identify as able-bodied? That MacKinnon’s feelings trump someone else’s disability?

Because this is the level of colonisation and appropriation which transactivists are demanding women tolerate. If it’s ok to do this to women, how is it not ok to do it to the disabled?

I do not mean to suggest that being a woman is a disability, of course. I do mean to say that our *bodies* are different from male bodies, and the degree to which we can participate in society is the degree to which those bodily differences are recognised and catered for.

Still on the subject of disability as an analogy: nothing here judge’s the strength of the trans person’s feelings or suggests that they are not sincere about feeling like a woman, or that they should be disabled.

If MacKinnon were trying to identify into disabled sport, the question would not be their sincerity. It would be whether society should reify their (sincere) belief at the expense of disabled people. Hopefully we would agree that that is unreasonable.

It should be unreasonable in the case of women as well. That it isn’t is testament to the extraordinary levels of sexism in our society, not any merit in the transactivist argument.

Here is barrister Julian Norman talking to Raquel Rosario Sanchez about why sex and gender need to be protected separately. Sex discrimination cases around women’s bodily functions cannot be fought if the definition of woman is changed to include males. 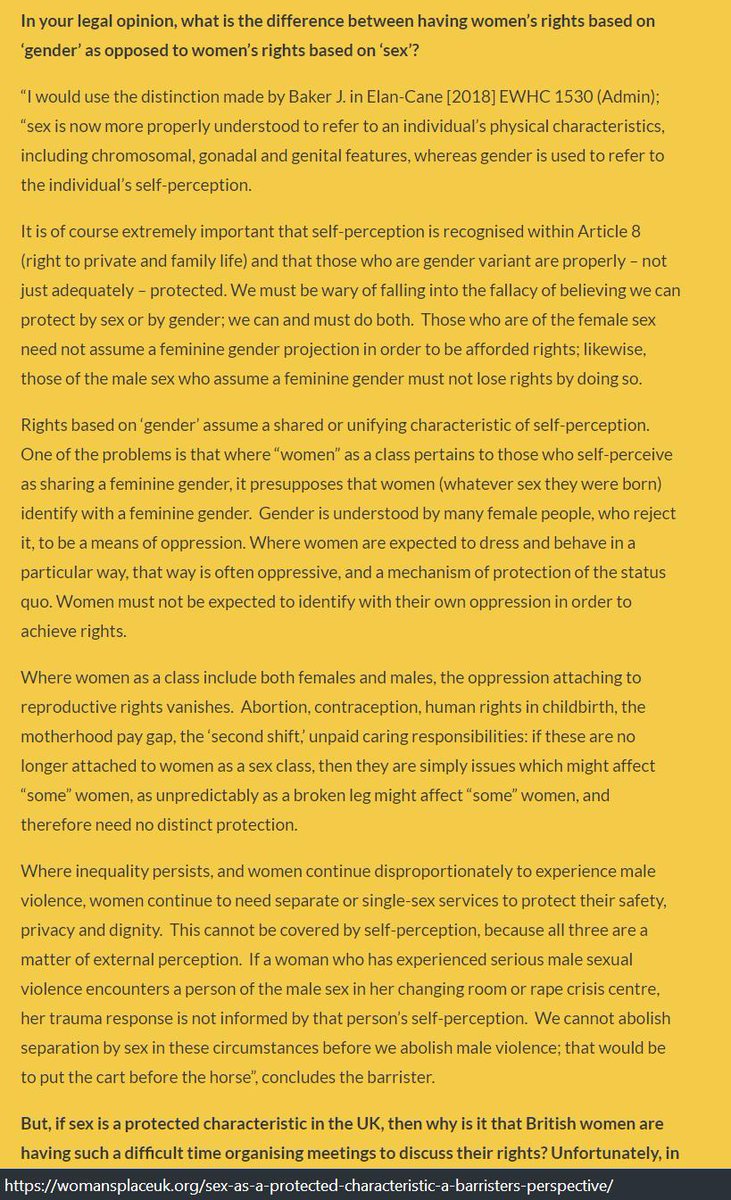 Women cannot be protected as a sex class if the defining characteristic of the class becomes subjective gender identity rather than sex. This is why we say that including transwomen in the legal class of women destroys women’s rights.

Removal of existing rights (which is the effect of gender self-id on women) is a human rights violation. This does not imply that transwomen can’t transition. It means that the legal category they transition to cannot be women. It needs to protect gender explicitly.