This is such ahistorical drivel – does this child understand how ridiculous she sounds? The alt-right *emerged* from precisely the same kind of norm-free identity politics that produced gender ideology a la Butler.

This is such ahistorical drivel – does this child understand how ridiculous she sounds? The alt-right *emerged* from precisely the same kind of norm-free identity politics that produced gender ideology a la Butler.

Martha Nussbaum presciently spotted the problem in her essay on Butler: “The Professor of Parody”. If you treat only the destruction of norms as normatively permissible, then you have nothing by which to judge what is good for people (a point @janeclarejones makes repeatedly). 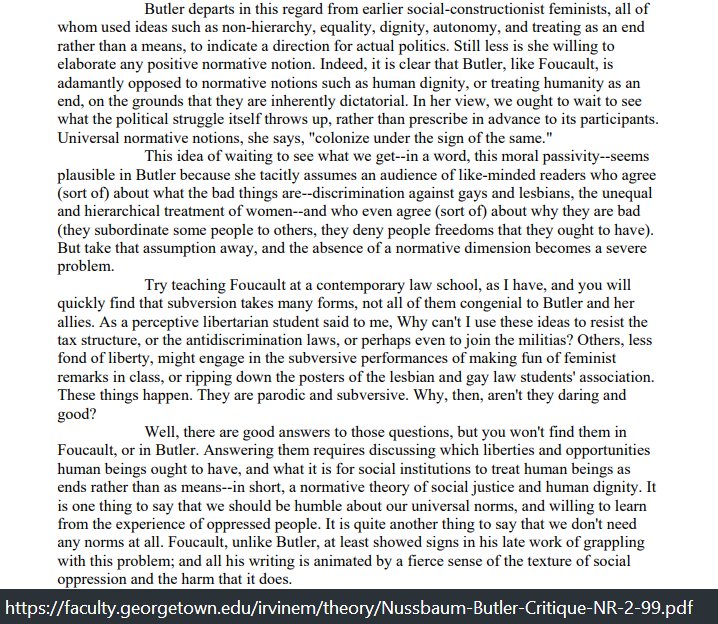 Questioning what we treat as normative is fine – it’s how change and progression happens. Saying that the only good is the absence of norms just hands over the playing field to neo-lib consumer capitalists chanting “choice”, as this article points out:

It also allows those who wish to oppress others, or retain unfair privilege, to claim an identity, and the right to fight for themselves as a group, again because no norms around rights or justice are permitted. Think MRAs, incels, the alt-right/white supremacists.

Think MAPs and NOMAPs (aka paedophiles) pleading oppression, and assorted fetishists claiming that they have a right to women’s spaces and the legal protections afforded to transsexuals, because of a tenuous and invisible “identity”.

The ideology (or lack of one) promoted by queer anarcho-leftists is precisely what prevents us from confronting the alt-right in terms of human rights – because we are no longer able to define and elucidate those rights in an anything-goes abyss of relativism.

It’s what prevents us from naming and combatting organised sexual predation on women and girls.

The same lack of a rights-based approach makes it possible to accuse feminists standing up for women of hate speech, instead of demanding to know why women’s hard-won rights are up for discussion in the first place.

Nussbaum again, critiquing Butler’s quietism and ‘subversion for the sake of subversion’ as having no beneficial effect on the reality of women’s lives, as being a collaboration with evil. 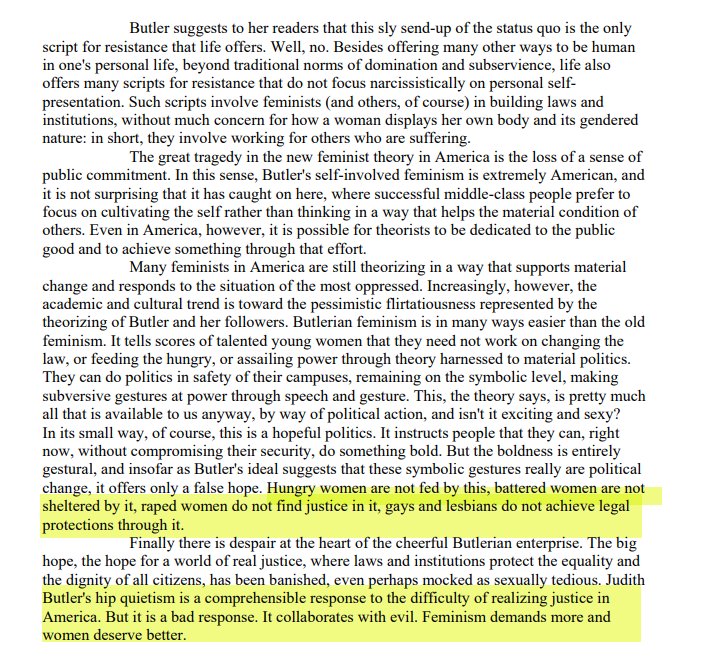 None of this is unsurprising in a culture where all community solidarity has been whittled away and the only thing we can decide on is what to buy next. Cui bono? Follow the money.

Meanwhile we have no yardstick by which to judge political assertions for ourselves (for all the reasons above), and so authoritarian pseudo-leftists like Gorcenski can get away with pronouncing themselves the arbiters of what the rest of us are permitted to think.

They are chillingly similar to the Nazis they claim to be opposed to. What the Nazis did was fill a moral, social and economic void with meaningless authoritarian pronouncements which had an air of inviolable certainty, just as the modern left are doing.

And once Joe Average had surrendered his ethical autonomy to authoritarians, he became subject to their dictates about who was an out-person and therefore deserving of authoritarian violence, just like the modern left.

These are ridiculous, rebellious children demanding that everyone chant their mantras or be labelled politically untouchable. But they wouldn’t be the first bunch of adolescent ideologues to unleash violence of historic proportions.

Just as an addendum, the increasingly totalitarian way in which queer theory is being enforced has been addressed by queer theorist Christopher Reed here

and caused a public spat which was responded to here:

This is queer academia beginning to self-critique (and not before time). They’ve drawn precisely the same analogy which I have.