Fuming, muttering and plotting the removal of the patriarchy. All this high-sounding bumpf does not obscure the fact that HMP are shoving male prisoners into the female estate without female prisoners’ consent. The males get to choose, the women get to suck it up.

Fuming, muttering and plotting the removal of the patriarchy. All this high-sounding bumpf does not obscure the fact that HMP are shoving male prisoners into the female estate without female prisoners’ consent. The males get to choose, the women get to suck it up.

HMP’s Care and Management Policy does not regard a previous history of sexual offences against women to be an exceptional circumstance preventing a transwoman from being placed in the female estate initially. 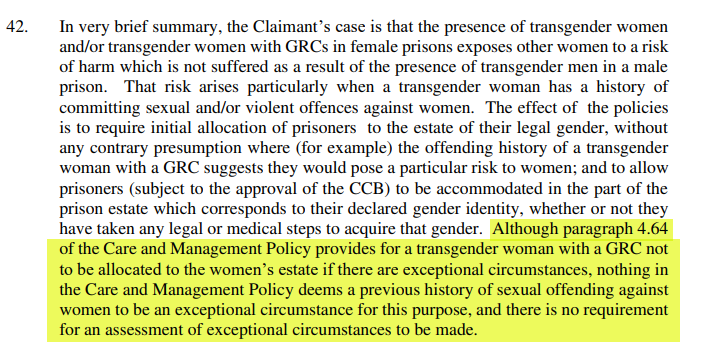 49.7% of known TW in for sex offences, vs <20% of males, so more than 2.5x the risk. Claimant’s counsel says this means an increased risk to women if TW are moved to the female estate. 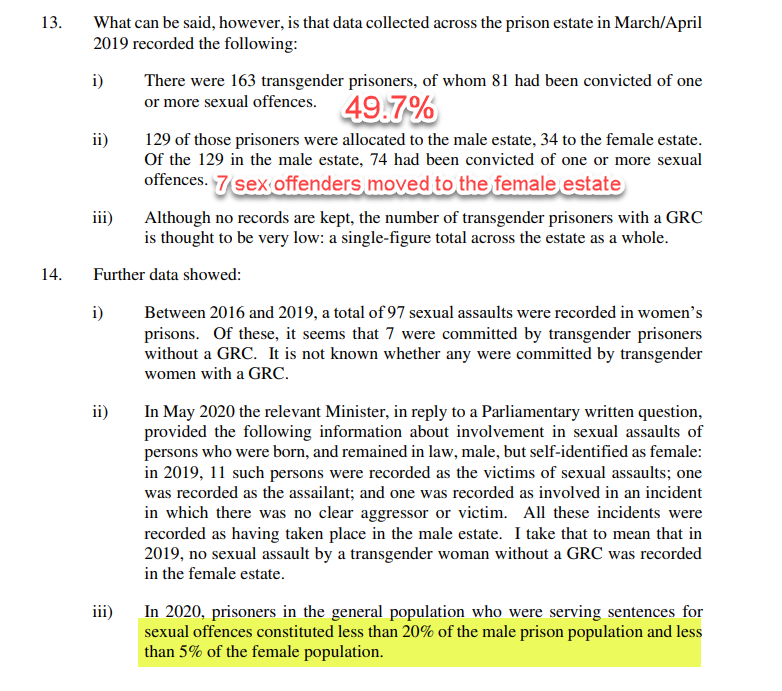 So Claimant avers that introducing a group with a higher than average risk of sexual offending violates female prisoners’ Article 3 and 8 rights (Human Rights Act 1998). Yup. 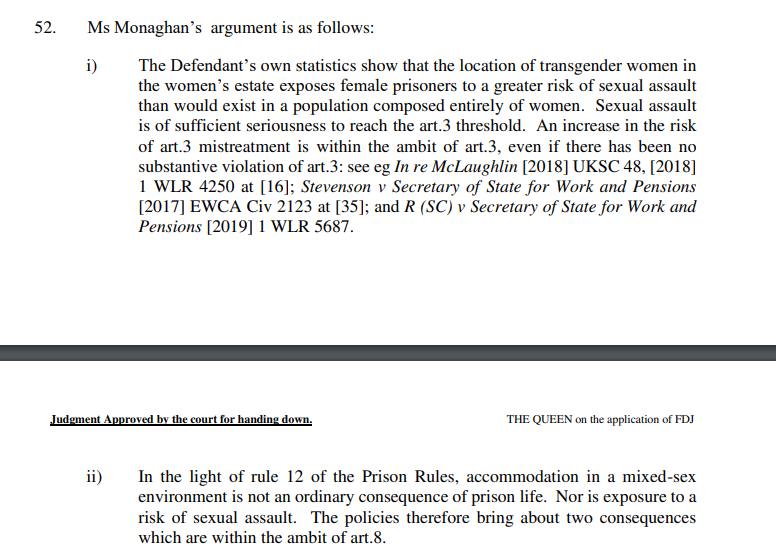 The risk is not increased for men, only for women. How is this not sex discrimination? 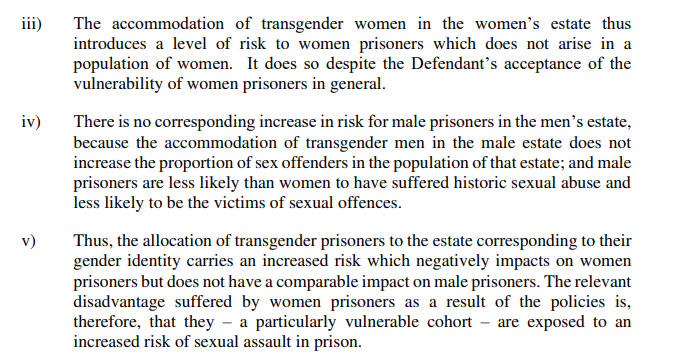 The wokewoo from the crown counsel is astounding. The claimant says she was sexually assaulted by a transwoman in the female estate at Bronzefield. Her art 14 right not to be discriminated against hasn’t been violated though. Is avoidable sexual assault not a ‘disadvantage’? 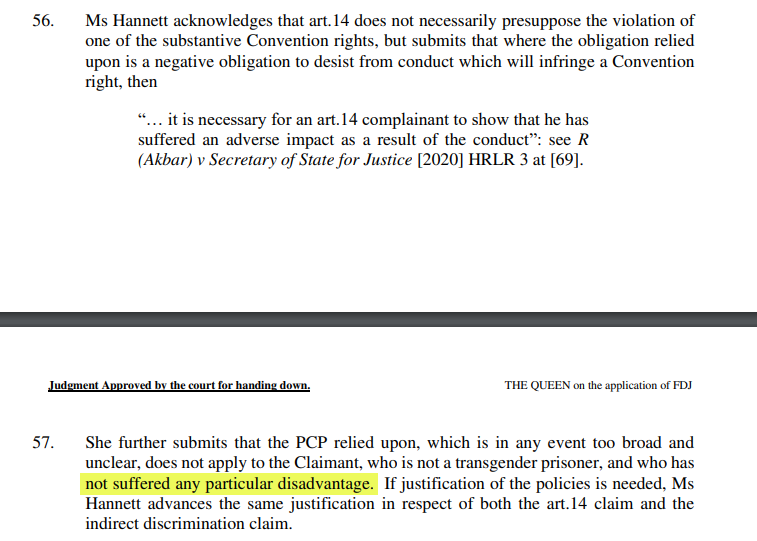 This is probably correct, and demonstrates what an ass the law is. The exemptions need to be mandatory.

At least the decision makes it clear that it is finding on the lawfulness and not the desirability of the policies.

The fact that the statistics are limited is an artefact of govt’s failure to take women’s interests into account. If these are the only figures available then you cannot say that TW are *less* than 5 or 6 times more likely to commit an assault just because you haven’t got data. 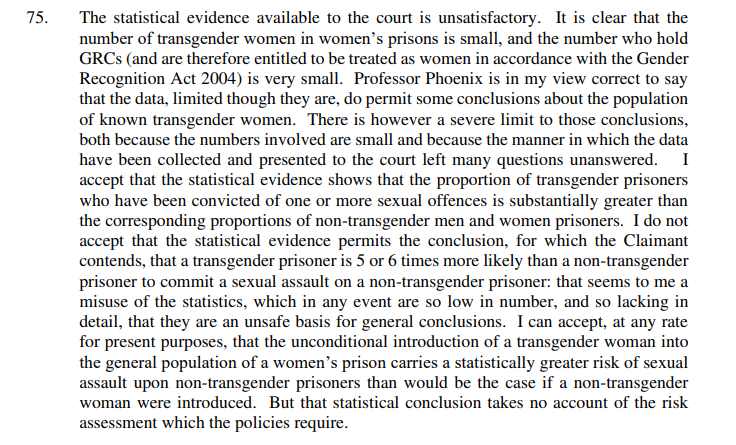 There are all sorts of data collection weaknesses around this, including crimes being reported by GI and not sex, TW getting wrist-slaps by pleading psychological distress, as well as shorter sentences not being counted, not all trans ppl declaring their GI, etc.

Until you’ve actually collected the data, those are all fudge factors. They do not entitle you to say that the computed probability from the data is either high or low, so you take it at face value until you’ve improved your numbers.

Risk = probability x impact. The impact of a sexual assault on an incarcerated woman is so high that you have no justification for discarding the face value probability because you *think* there are other factors, especially when it’s this high.

TL;DR Yes, it’s very upsetting for the woman and I understand all that, but the men are more important. 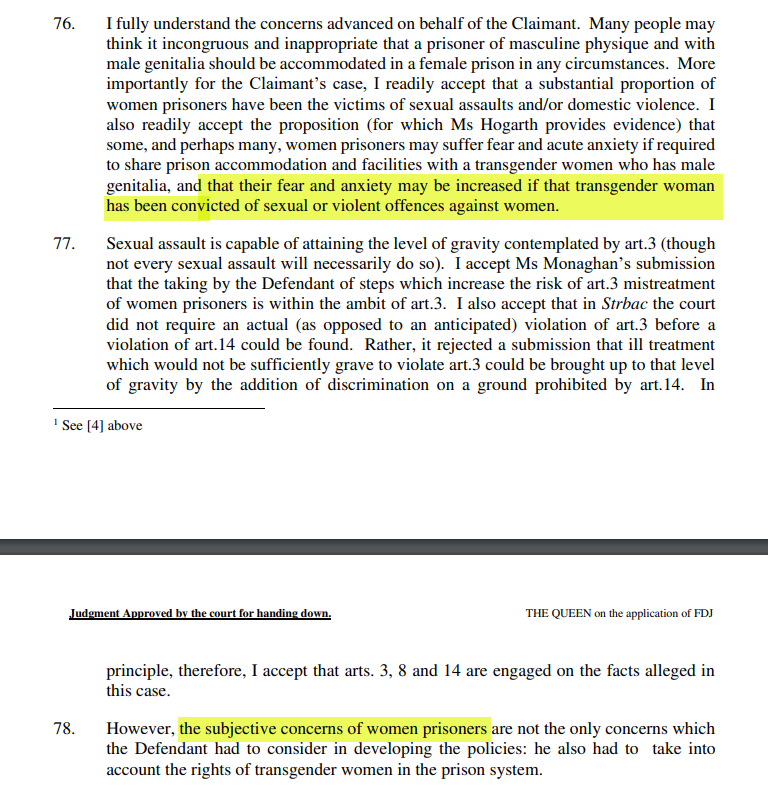 *(I’m not sure how rape is a “subjective concern”)

These ‘experts’ got Karen White wrong, and 7 others (Telegraph link, anyone?) Even if an imprisoned male has *no* previous history of sexual offences, why wouldn’t he have a go if he’s in for a long time and it’s this easy to get transferred to the women’s estate? 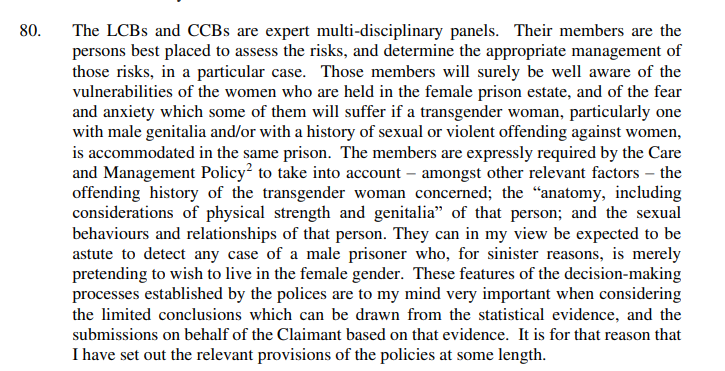 Even James Barrett (BAGIS) thought this was a bad idea, but the ‘experts’ know better. Well, I’ve got a very nice bridge to sell your ‘experts’. 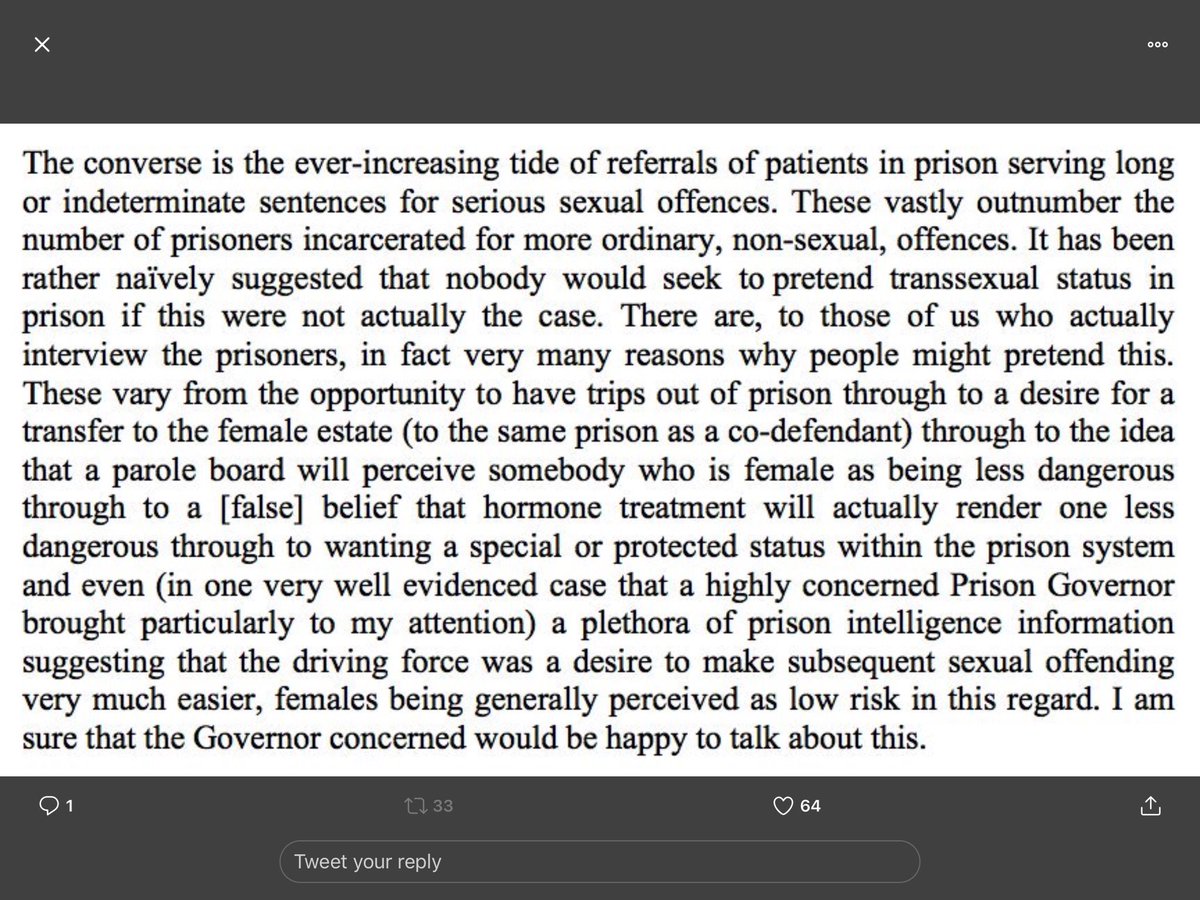 This is a ‘right’ which should not exist. Robert Wintemute on SOGI having completely ignored the impact on women’s rights of allowing men to identify as us is good. I’m a #FIXTheGRA rather than a #RepealTheGRA type – I think it should be possible to identify out of being a man.

Ie, I’d support a 3rd gender and a protected characteristic.

But that’s as far as it goes. Women’s rights, and the legal definition of woman, need a ring of steel around them.